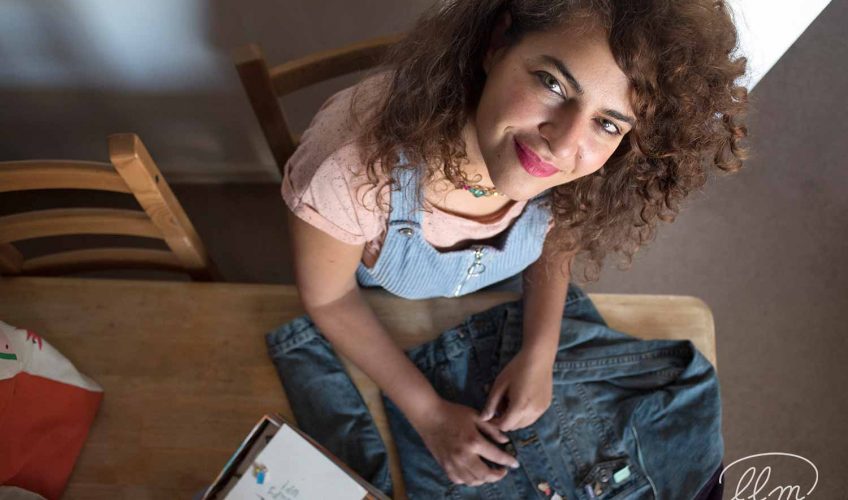 Anila Babla, named her business Lubjoo after the way she and her sister used to say “I love you” to each other growing up. In fact, she recounts, “we still sign off on text messages that way.”

The inspiration for this cutesy name, besides sibling sentimentality, is the Japanese culture of cuteness known as kawaii. Anila says things like “little cupcakes with faces” is kawaii and that “Hello Kitty is a big name in that universe”.  Her products – from enamel pins to pineapple bags – channel the kawaii vibe.

Anila explains: “I just like fun stuff, colourful things and novelty versions of things.” She laughs and uses what she is wearing as an example: a white jumper covered in cartoon fast-food drinking cups with smiling faces.

Looking around her apartment it reinforces this, her living area is open plan with colour bursting from every corner. Anila explains: “I love all these cute Japanese things and it started off as a personal hobby and my personal collection turned into the first things I was selling.”

She finds her products online from countries including Korea, Japan and Taiwan where Kawaii is most popular, first discovered when she was trying to commission commemorative pins for University College London when she worked there as Marketing Manager for the health science faculty.

Anila recalls: “From doing research into suppliers I thought: ‘Oh these are really cool!’ I just started finding really interesting stuff from there.”

It’s unsurprising in a way that Anila loves objects that are aesthetically appealing. She studied Theology and Creative media at the University of Exeter and then, in July 2019, she qualified as an art therapist.

“I’m very visual, so even when I was doing computer science (as part of the creative media course) it’s very visual, websites are a visual product.”

After university, she fell into communications and marketing roles, including her fateful stint at University College London. Then, in 2016, Anila embarked on her art therapy masters. She remembers:

“It was weird because some people describe career changes as a realisation like ‘Oh I hate my life’ but it wasn’t that drastic. I just met an art therapist, then another one and thought this is really cool. I didn’t realise that existed as a career path.”

Studying for a second time was a completely different experience for Anila who laughs that her friends from Exeter thought she was mad going back to university. She explains: “It’s different at masters level because you’ve made a conscious decision. I felt like I really wanted to do this. I surprised myself at how much more conscientious I was.”

Since she qualified, Anila has started working one day a month as an art therapist at the Royal London Hospital in Whitechapel, which she can see from her flat balcony. The workshops she runs are for patients with bleeding disorders including haemophilia and Von Willebrand disease.

Anila explains why art therapy can make such a difference: “It doesn’t feel so intense and personal. People can start making art and it’s quite freeing. It can open up new avenues to talk about things or not talk about it. I really believe that art in itself, even making things without trying to psychoanalyse it, is healing.”

Setting up her business

As part of her studies, Anila had to undergo therapy and this has given her insight into her own limitations, especially when it comes to setting up Lubjoo. “I’d been thinking of doing a market for a while but came up against a lot of personal resistance.” From pitch fees to sourcing a card reader, Anila used these excuses not to commit to developing Lubjoo.

Lady Lane Market was just what she needed: “Now there is a lot of support I get stuff done and just do it even when I feel resistant.” She laughs again and adds: “I say that like I’ve mastered it, I haven’t”.

Luckily for Anila, her fellow traders at Layd Lane Market give her the support she needs: “The nice thing about this is actually the women on the market are all different ages, it’s a whole mixed bag of different people at different life stages.”

“One of the things we were talking about is this crisis of confidence that we can have. I never really thought I had that but, for me, it was thinking maybe this isn’t really viable. Some of the [other women on the market] are really inspiring because they face lots of challenges and are still going for it.”

In the long term, Anila hopes to start selling her own creations: she is currently developing a range of marbled products, trying out techniques with paper, ceramics, silk and even leather. It’s an art form that she’s been fascinated with from childhood.

“I learned to marble when I was seven and I remember being mesmerized,” she recalls. “Even when you do it wrong, it looks beautiful.”

It’s for this reason that she uses her marbling craft in art therapy sessions: “I’ve done it with clients as a therapeutic thing where you can make mistakes and something really beautiful still comes for it.”

Because working in therapy can take a psychological toll on the therapist too, Anila would like to reach a point where she spends half of her time working in art therapy and half her time making her own art and running her businesses. She explains: “I think keeping up my own practice is healthy for me.”

Anila has recently set up a new business called CraftRehab.