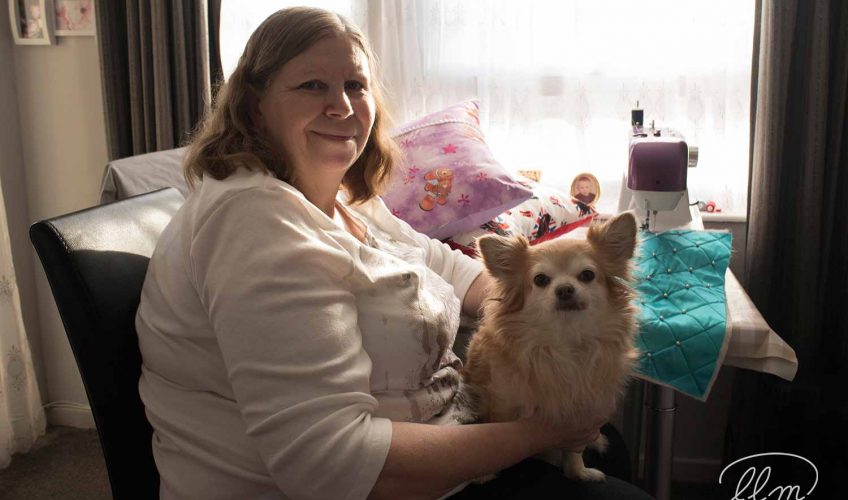 Walking into her 1960’s flat in Mile End, it’s clear that Carol Street, 60, loves interior design, and not just because of her impressive home sewing set up.

Her grey and silver living room is immaculately coordinated with a selection of her creations on display in the far corner: a black satin cushion covered in handsewn pearls, a flamingo-patterned memory board and a red cushion with a pocket sewn on the front for storage.

Moving back to London

Carol has lived in the area since 2014 after moving back to London because she couldn’t find any activities for people over the age of fifty in Harlow.

Harlow had been home for most of her life – she moved there from Watford with her family as a young girl but times were changing. Carol had been working in the local branch of Marks and Spencers. She loved it there but, requiring a double knee replacement, she took medical redundancy.

As Carol found herself in a new stage of life, Harlow was no longer quite right. She recalls: “In Harlow, there’s nothing for over 50s, no clubs or anything so my friend said to come back to London.”

“Now I’m here I love it because I’ve made so many more friends.”

On her first day back in London Carol went along to an over-fifties coffee club where local ladies met regularly for arts, crafts and conversation at the St Paul’s Way Community Centre. It changed everything.

She remembers telling one of the women that she wanted to learn to sew and before she knew it, she was told about the Bow Sewing Centre run by local resident Mona Nashed at Gayton House.

The course might have been for beginners but Carol certainly wasn’t by the end: “I was surprised on that first course that we would actually be making a pair of curtains.”

Through the workshops, Carol heard about a local business course. Carol recalls: “I went along and thought ‘Oh yeah this is for me’ but I still didn’t do anything with it because I just didn’t know where to start, it all seemed so overwhelming.”

One of the friends she made at the business course, however, was Audrey Aymer. The founder of East London Stitched and Carol kept in touch and when Audrey got involved with Lady Lane Market, she told Carol about it.

She decided it was time Carol’s Home Delights became a fully-fledged business. Carol says: “I can’t believe it really. To be 60 and starting a business!”

“Before I’ve not been making a penny, I’ve just been giving things away. Now I think I can do this – it gives me something to do, it gets me out and I’ve met some lovely ladies, everyone’s friendly. I think it’s going to be the best thing I’ve done.”

In fact, it has made her love her craft even more: “I enjoy it a bit more now I’m doing it to sell, I’m writing down ideas and I’ve got a notebook where I write things I think of.”

She says she gets her inspiration from everywhere: “Sometimes I buy fabric and I think ‘Oh that would make a nice cushion or a nice board’.”

The programme 60-minute Makeover is also an old favourite: “If I was out at work or doing something I would tape it.” Carol adds: “I’ve always done my own painting and decorating.”

She says that she has big plans to enlist her son, a painter and decorator by trade, to help her redecorate in the new year, changing her colour scheme from grey to cream. One of her sons has already staked their claim for her curtains.

Trading at Petticoat Lane Market is extra special for Carol, who recalls visiting regularly before moving to Essex: “I remember when I was a little girl my dad used to bring us up on a Sunday. We would go up there with my brothers and sisters, we’d walk all along they used to sell dogs and everything there. While all that was going on mum was at home doing the dinner. So to be there now is lovely.”

She adds: “[My Dad has] been dead a long while now but he would be tickled pink to think of me at that market.”

Running her own business is different from anything Carol has ever done before. Before working at Marks and Spencers Carol was a registered childminder, something she started when her youngest son went to school.

She stopped when she got divorced when he was 13 years old to look after him. Juggling everything, “was hard because we were in Harlow and [her ex-husband] was in Wales”.

Now her sons have families of their own and her grandchildren are her biggest fans and regular recipients of her pocket cushions – they like to use the in-built pouches on the front of the cushions to keep their latest books or games controllers close to hand.

She laughs recalling how she assumed that her eighteen-year-old grandson would no longer be interested in them. She was proved wrong when she gave one to his younger brother and he instantly asked: “Do you have one for me too?”

Carol’s three sons and their families still live in Harlow, but she sees them regularly. She says: “They were happy for me to move up here.”

She isn’t lonely living away from them thanks to the friends she made early on when she moved back to London. Carol is still in touch with many of the ladies, even though sadly, she reflects: “Now [the coffee morning is] all disbanding because they can’t get anyone to run it.”

She has another helper when it comes to meeting people: her six-year-old chihuahua Lola.   “She makes a lot of friends before me and then they start talking to you,” laughs Carol.

Much of Carol’s day revolves around Lola, she gets up at 6 am to walk her and takes her out again at lunchtime, sewing in between. Luckily, Lola isn’t scared of Carol’s sewing machine and sits quietly while Carol is busy making her products.

Embracing life after family and work, Carol proves that it’s never too late to learn a new craft, or even start a business. “It’s exciting,” she says, “I’m making things for a reason, not just to put it in the cupboard.”