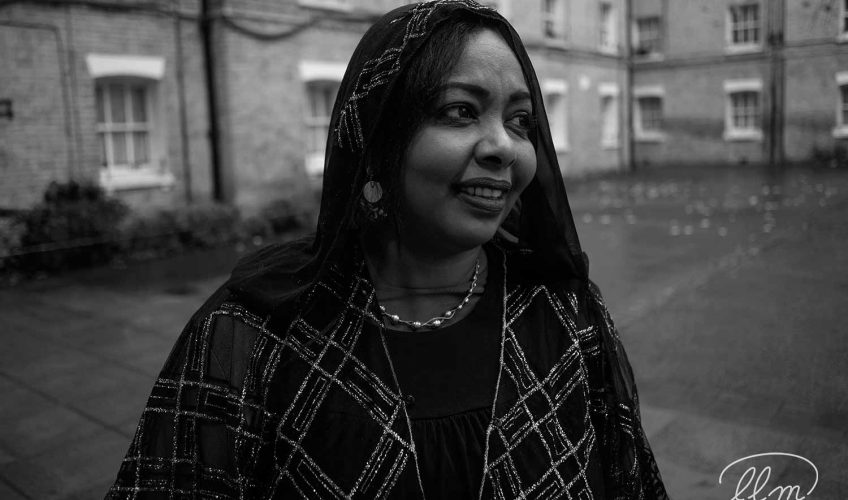 Nadaa Alssir, 38, is indomitable. She works as a medical interpreter, cares for her three sons, including her eldest who is autistic, and now she is setting up a business too, designing and selling traditional Sudanese jewellery.

She grew up in Sudan before moving to the UK in 2004 when she, her husband and eldest son left their home as refugees.

“My husband worked in the army and in 2003 they started to have a problem with the government,” recalls Nadaa. “He left the army but they still followed him and then they arrested him for six months. We didn’t know or hear anything about him, we asked everyone. They took him for no reason because he left the army and he didn’t participate with them.”

“When they brought him home on that day we decided to leave Sudan,” adds Nadaa.

Nadaa and her family were sent to live in Swansea ten days after registering with the Home Office in Dover. Four months later they were granted indefinite leave to remain.

Nadaa and her family lived in Swansea for two years until she met a Sudanese PHD student who specialised in autism. She recommended that Nadaa and her husband move to London so that their son could attend a specialist school for children with autism.

Her son, who is sixteen years old now, has autism and is non-verbal, so “I do everything for him,” Nadaa explains. “I feed him, I shower him, I take him to school, I look after him like a baby.”

Moving to London as a family, first to Bethnal Green and then to Aldgate wasn’t easy. Nadaa recalls how it took her husband two years to find a job. They did settle, however, and Nadaa says: “Now we love London.”

One thing that Nadaa found difficult when she moved was losing her support network, going from living with family to having no relatives in the country: “This is very hard for me but life here is better and for my son, there is support for everything.” She visits her Mum back in Sudan every six months.

Nadaa’s first interaction with the Sudanese community in East London was when, three days after moving to the area, she met someone in the Bethnal Green Tesco and got chatting to her. It transpired that they were neighbours in London and now she has a wide group of friends from all around the world.

She clearly has a lot on her plate but Nadaa is upbeat as she talks, laughing as she says “I’m very very busy”, adding: “I still like to do my own thing.”

For five years, that thing has been working as a medical interpreter. The zero-hours contract gives her more flexibility than a nine-to-five but it still requires inspiring levels of organisation.

How Nadaa gets it done

When I ask Nadaa how she fits everything in she laughs and says: “Oh my time management is good.” At the weekends Nadaa’s two younger sons study Islam and Arabic so Nadaa gets things straight at home, getting her sons’ uniforms ready and cooking for the week.

“From Monday to Friday because I can get work at any time my husband is supporting me a lot. He left his job as a security guard to work as an uber driver so that any time I need him he comes to me.”

If Nadaa has a busy working day ahead of her, she gets up at five in the morning to put their uniforms out and cook, explaining: “Sometimes even the weekends are not enough for me.”

By six o’clock in the morning, her house is clean and everything is ready for her sons to go to school.

When Nadaa needs to leave for work her husband takes over. They also have carers who help with their eldest son for one hour in the morning and evening.

A jam-packed schedule, however, doesn’t mean that Nadaa doesn’t make time for herself. Every Wednesday she goes to the Turkish Bath Hamam in Dalston for the sauna and an anti-stress massage.

She says taking time out helps her stay on top of everything and be there for her family: “When I start to get depressed or in a bad mood I can’t do anything for them, that’s why I need my own time.” She laughs and says: “It’s very nice, I invite everyone.”

Making time for herself

Juggling everything isn’t easy: “It is difficult but I still like to be happy, do good things and do positive things for my family.”

It’s no surprise that Nadaa’s friends and husband thought she was crazy when she said she wanted to set up a business. Nadaa is defiant, however: “I decided I would do it. If we want we can do anything.”

So far Nadaa is enjoying the process: “I didn’t know the ladies working at the market but they supported me a lot on my first day. I like working with them.”

Despite her busy schedule, she has long enjoyed drawing and designing to relax. Nadaa recalls how even as children she and her sister would collaborate, Nadaa designing the jewellery and her sister making them. She says: “I have liked drawing since I was a child.”

With their new business, Timera, Nadaa designs the jewellery and sends her designs to her sister who still lives in Sudan to bring them to life. Having sold her jewellery online for a few months, Lady Lane Market is the first brick and mortar – or tarpaulin and table – outlet.

Nadaa’s jewellery is inspired by traditional Sudanese pieces, which are hard to find in London. She says: “Here we don’t have these African designs and we have traditional parties and weddings and it can be difficult to get things from Sudan and Africa so this business will be good for people.”

There is one trader that Nadaa knows well, her friend of ten years Sophia Mohamed. They met when they were both studying Business Information Systems at the University of East London in 2009 and have both supported each other in their business journeys ever since.

In fact, Nadaa says Sophia inspires her and is supporting her a lot: “We are like sisters now.”

The fact that Nadaa juggled studying with raising young children explains why she isn’t fazed by her busy schedule. As a student, she used to get up at 4 am and not get to bed until 11 pm. Now she gets a little bit more sleep although only by an hour or two.

She says: “We have 50 families in the UK who have children with autism from Sudan so I support them a lot.”

Every Saturday morning at seven, Nadaa sits down and does a Facebook Live, answering their questions on the support available, the school her son goes too and more “because I faced this problem when I moved here and I didn’t have anyone to help me.”

Nadaa’s jewellery stall at Lady Lane Market holds the tale of her Sudanese heritage, but it also holds the story of a woman working tirelessly to give her family and those in her communities a better life.