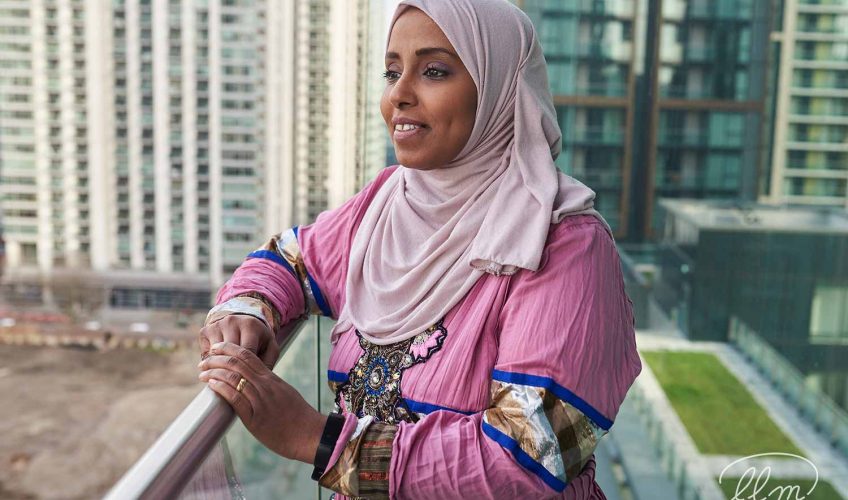 “Why can’t every woman achieve what they want?” asks Sophia Mohamed, 39, as she reflects on her journey founding Aseel’s Kitchen and joining the newly-formed Lady Lane Catering Company.

We are sat in Sophia’s new-build flat in the heart of London’s docklands. Canary Wharf is in the distance and the DLR whizzes past at regular intervals looking like it is part of a model railway rather than a train big enough to cram in lots of people.

For Sophia, Lady Lane Market (her first experience at a market) is the culmination of years spent perfecting her mandi rice, a dish that originates from Yemen but is eaten across the Middle East including Saudi Arabia where Sophia grew up.

To make the dish, Sophia uses a special pot that separates the meat and the rice. The meat, often chicken is cooked over the rice and as the fat drips down into the rice it gives the dish a smoked flavour.

For Sophia, she believes her mandi literally fills a gap in the market – currently, if she wants a taste of home she has to travel to West London (she recommends the Shepherd’s Bush restaurant Red Sea for Yemeni food).

“I feel like this is my unique selling point, that people have never tried something similar. It’s not spicy, it’s just right, it’s moist, soft meat. Everyone is giving me great reviews and this for me is go-ahead to keep going.”

Starting this has changed her life. In 2017, Sophia was working full time for a Women’s Health charity doing their finance. With a two-year old son at home and three older children, she started to think that working nine to five wasn’t quite working.

She recalls how she and her husband were struggling with childcare and how her routine was becoming a stress: “I felt like my life was going. I’d wake up in the morning, take the kids to school, go to work, come back late and prepare dinner so I wasn’t actually feeling myself at all, even mentally I wasn’t in a good position at that time.”

Her brother suggested she started doing something with food and so Sophia started reducing her hours at work and decided to take the plunge: “I ordered this special Mandi pot from Saudi Arabia and I thought okay let me at least start with family and friends. It took me six months just to master it – every week I would try and take photos for Instagram and I started it slowly.”

Sharing her food with friends, family and colleagues lead to Sophia’s first catering opportunities which can take hours to prepare for: “I start cooking as soon as I drop the kids at school and sometimes I’d have to wake up at four or five in the morning to start preparing.”

It sounds like a lot of work but Sophia has enjoyed the transition to being self-employed, revelling in being her own boss: “I have my own deadlines but I have to manage myself, every day I go through my own to-do list. I would say it’s less stressful.”

“Yes it’s tiring but by the end of the day when you earn that bit of money it feels like you deserve it, you’ve worked hard for it,” she adds. In fact, the bit that she has found the hardest is not having a car when shopping for ingredients and having to take public transport.

Surprisingly, Sophia wasn’t initially planning on joining Lady Lane Market herself. She discovered that she could join when filling in a sign-up form for a friend who she thought should start trading at the market. When she saw that food was an option, she recalls thinking: “Okay I have nothing to lose.”

The project is a manifestation of an idea that Mohamed has been dwelling on for a while: “It was in my mind for years and years and years, not only cooking but wondering why every woman can’t achieve what they want. I was thinking maybe we can come up with a business so that all these women can achieve.”

She cites a neighbour who wanted to become a chef and another who would love to make jewellery but can’t due to lack of equipment and funds.

Sophia is passionate about finding a way to enable women to become businesswomen: “Women can have our own businesses, give women the power and we can do it. I know we can do it, we can achieve things if we work together.”

Her other passion is family. Sophia moved to London in 2006 when she got married, as her husband was already living here. She recalls how the move was difficult: “It was hard, it was tough leaving a lot of my family behind. Here my family is just my husband and my kids. My brother is here too though and he has been a great help since I moved to the UK.”

Luckily Sophia found it easy to make friends, something that’s unsurprising chatting to her given her warm personality. She remembers East London being a welcoming place to move to: “When people are nice they don’t make it hard for you, especially in East London. I had so many friends in no time and everyone knows me which is amazing.”

She still misses her family and Saudi Arabia, having visited only once since she moved. It has got easier to stay in touch, reflects Sophia: “Technology now is better than it was before, Whatsapp is there so you feel like yes we don’t see each other but at least we are connected.”

Sophia’s four children are now aged between five and 12 and when she isn’t working she is busy helping with activities at their school, something that she has cut back on a little bit since starting with Lady Lane Market.

Having many irons in the fire isn’t unusual for Sophia – she studied Business Information Systems at the University of East London between 2011 and 2014 with three children at home, her fourth was born mere days after she graduated.

She juggled both being a mum and student by studying after her children went to sleep. She reflects: “It was hard, but I did that for them, at the end of the day I want to be a role model for my kids so they can see that if I can do it they can do it as well.”

There is no doubt that her business will be inspiring too and Sophia says her children are already supportive: “They’re very excited for me to start at the market, they can’t wait.” They love Sophia’s food too, although she laughs and says: “I was cooking it every week so they got tired of it.”

Sophia’s husband is also a great support, not least because his job in a local school enables him to be at home at similar times as the children. When Sophia started her business, she recalls him saying: “If you need anything, I’ll be there.”

Amidst all the business, Sophia ensures that she takes time for herself. “If I’m stressed then the house will be stressed, the kids will be stressed,” she explains. A deal with her friend and fellow Lady Lane Market trader Nadaa Alssir? to see each other weekly means they both get some guaranteed time for themselves – whether that is for coffee or a spa trip.

Talking to Sophia, it is clear she cares just as deeply about the success of her fellow traders as her own: “I’m so happy to be a part of [Lady Lane Market] and hopefully in the future, it is going to grow bigger and better and maybe cover different areas and more people can join.”

Her dreams don’t end there either: “If everything goes as planned, hopefully in five years time we could open up our own small restaurant and work as a team, five or six of us maybe.”

With such vision and passion, Sophia is an important presence at Lady Lane Market. Hidden in every bite of smoked chicken and rice is the story of how one woman is cooking not just to inspire her four children, but to find a way to empower women who otherwise might not find a way to fulfil their own dreams.