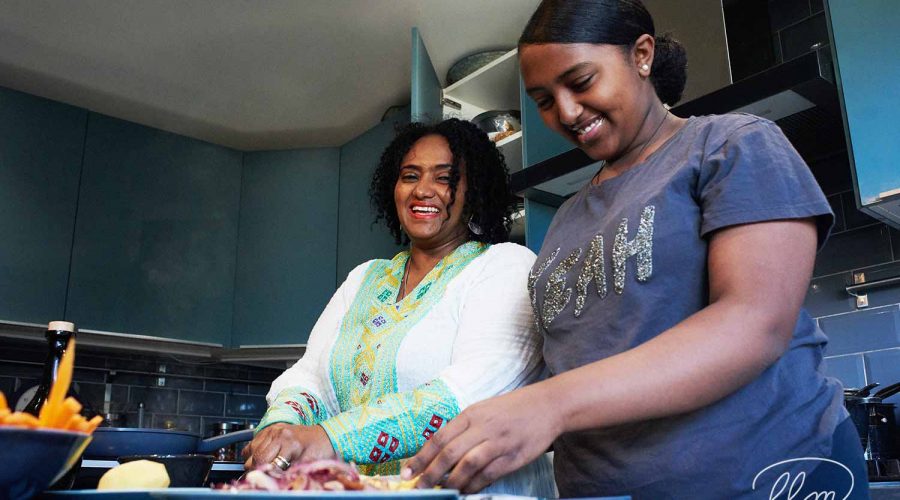 If you looked up the definition of someone doing it all, you might find Woin’s name listed.

She has three daughters, teaches Ethiopian cooking classes, runs a catering business and as if that’s not enough, is starting to sell freshly cooked street food at Lady Lane Market.

Woin moved to the UK from Addis Ababa, Ethiopia’s capital city, to study at City and Islington College, London, in the early nineties. She then studied IT at the University of East London and with extended family in the area, making friends and meeting her partner, Bow became home.

We meet at the Bromley-by-Bow Centre after Woin has dropped her children off at school. She has short curly hair and her black eyes sparkle as she talks about starting her business. Proving her expertise in time and motion, she’s planning to meet someone else right after our meeting.

Woin decided to set up her business cooking plant-based Ethiopian food two years ago when her youngest daughter turned five. As part of her business, she both caters events and teaches cooking across London. Working in the food sector is quite a departure from Woin’s previous career – before she had her daughters she worked for Hackney Council then at High Street Kensington Council.

While taking a career gap to raise her youngest two children, now both at primary school, Woin took cooking courses and travelled, waiting for the right time to start her business.

As soon as the youngest started school a couple of years ago, Woin started developing the business and creating the dishes. “I thought the kids go to school all day and I don’t want to waste my time!”

Her family support her business and are eager taste testers, but Woin explains that her husband was initially worried that she would find it too tiring to balance the demands of a young family with the demands of running her own business, and he suggested she go back to the safety of an office job.

This was the motivation Woin needed. She laughs, saying: “He didn’t believe me before, but the more he discouraged me, it just made me more encouraged to do it because that’s what I really wanted.” He still worries for her, but as he sees her coping with it all, he’s more reassured.

It’s not been easy though – Woin works while her children are at school but she describes sometimes working until one or two in the morning to get everything done.

If Woin can’t make the school pick up because she is catering in the evening she makes good use of the after-school clubs. And this will be where the children are whiles she trades on Lady Lane Market.

Weekends are Woin’s family time. On Saturdays they go to Church, an important part of Woin’s life and so she doesn’t work. She also tries to spend Sundays with her family: “I love to spend as much time with my kids because they’re growing and you need to be looking after them.”

Even so, Woin explains she will sometimes have to do odd bits and bobs, and she never switches off. Woin is resolutely upbeat about her relentless lifestyle. For every difficulty she mentions – such as spending half a day sourcing the right insurance or staying up until three am the night before – she shows an equal measure of excitement and ambition.

In fact, she thrives on the creative challenges. She describes her business as another baby that she wants to see grow: “I’m thinking night and day of ideas and strategies.”

Although her parents still live in Addis Ababa, their support is also important for Woin, who has been going back to visit regularly since she had her daughters, something she was keen to do to fill her time while she was at home and unable to work.

Her relationship with her mother has also greatly influenced her cooking. All of Woin’s knowledge in the kitchen stems from being taught by her mother as a child and even now, Woin says: “I learn more from her than I do at college.”

When Woin decided she wanted to start her catering company, she went back to Ethiopia specifically to reimmerse herself in the cuisine. She returned with thirty recipes. Her mother also taught her how to mix Berbere, an Ethiopian chilli spice mix that is a crucial ingredient in many of the dishes she makes for Ethiopic Kitchen.

Woin also lights up when she talks about her faith. She is a member of the Ethiopian Christian Orthodox Church and has been going to Church since she was a little girl in a country where it is a key part of society. Now, she takes her daughters and explains: “God is everything for me.”

Each Saturday, Woin and her family go to Church at St Mary Tserha Tsion Ethiopian Orthodox Church in Hoxton. They prepare themselves the day before and, on the day, they wear traditional white cotton dresses specially made in Ethiopia.

The Church community is a big part of her life: “It’s very welcoming and people share not only the same ethos but the beauty of the praise and ceremony.”

It’s not just Woin’s life that is impacted by her faith but also her food. Hidden within her business name is a sign of her religion – the word ‘Ethiopic’ is another word for Ge’ez, the language used for prayer during their Church services.

Woin’s faith also informs her dietary choices: Ethiopian Christian Orthodox followers observe lent for 250 days each year which involves not eating any animal products on those days. All the food Woin makes for Ethiopic Kitchen is plant-based.

Woin describes herself as “98% vegan” and says it’s often difficult to find the right options if she’s eating out: “I’m scared to eat in case it’s been mixed with meat.” Often hummus is the only option available to her.

This is why catering isn’t Woin’s final goal – she’d love to open a restaurant at the right time and also supply to major supermarkets. Woin is emphatic that any dish you can make with meat, you can make equally deliciously with plants: “Whatever meat dish you think of I can create the same thing vegan.”

Woin sees an opportunity in society’s changing attitude towards vegan food. She recalls going to a catering event at the ExCel centre a few years ago and being impressed at the variety of vegan food on offer: “I couldn’t believe my eyes at the amount of vegan cheese.” That said, Woin believes it’s still not common enough yet.

Looking at Ethiopic Kitchen’s Instagram account, you notice that Ethiopian food is bright and multi-coloured, something she says is all down to the way they eat in Ethiopia. Multiple dishes are served on one large tray and you then dip in with your hand and combine the dishes however you’d like. According to Woin, it’s best to combine the dishes in each mouthful.

Traditionally in Ethiopia, you also feed each other. Woin explains: “We call it ‘Guresha’ – which means someone who you care for.” The way you do this is to tear off some injera – Ethiopian flat bread – with your hand. Then, Woin says: “You take a pinch of every single dish that is on the plate, and gently you feed your family and friends who you’re sharing with.”

There’s no stopping Woin. Even as she explains how busy she is gearing up for Lady Lane Market, a second later she is talking about her other plans for growing Ethiopic Kitchen. All the while she meets the challenge of caring for her children and following her dreams daily – an inspiration to all working women.

Woin describes Lady Lane Market as an answer to a prayer, a way of reaching more people with her food, but she won’t be stopping with street food. Woin is just getting started: “I feel like I am moving one step ahead and still have lots of things to do.”