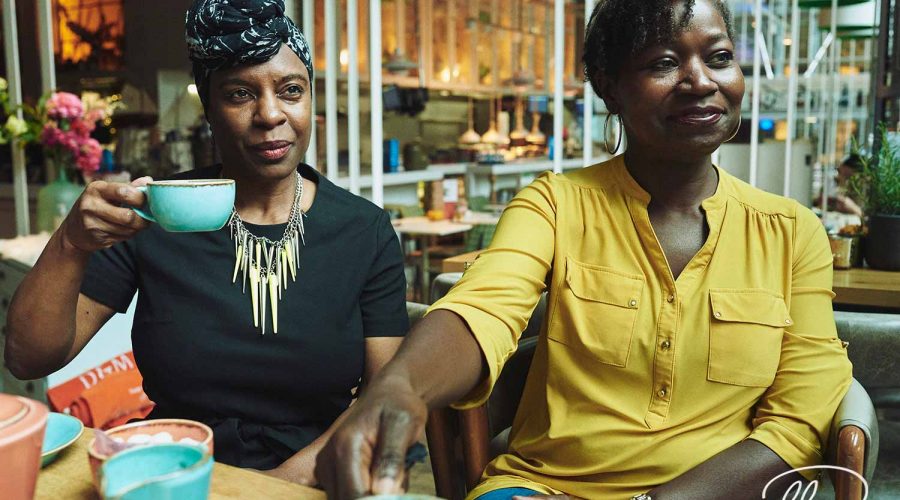 It’s rare that water cooler chat evolves into a fully-fledged business, but for Marilyn Crew and Susanne Nicholas that’s how they first started conspiring about Mazsu Naturals – at work.

They have been colleagues and friends since Marilyn started working in the same NHS trust as Susanne in 2014 – Bart’s. Susanne had worked there for over twenty years until she left this year to devote more time to their business.

The two women are clearly comfortable in each others company, bouncing off one another and taking it in turns to finishing off stories. They are chic too, Susanne with a yellow hair band tied around her head and Marilyn, the chattier of the two, with a black skull-patterned headscarf knotted with a flourish on top of her head.

As they’re talking about their skincare regimes, Marilyn cracks a joke about their rosehip and hemp cream being the reason she looks so great, but they do. Their skin looks glowing and healthy, so they’re clearly doing something right.

Mazsu Naturals sells all-natural, organic skincare products that the pair has formulated and created at home. They now have six products including a pomegranate and mango hair butter, a moringa and argan body butter, and their latest addition –  a beard oil with jojoba and black seed oils.

Their business started with Susanne. She was finding that hair products containing coconut oil, a common ingredient, would leave her hair feeling like straw and so started making her own. After talking about it with Marilyn at work they discovered a mutual interest and started attending courses. In October 2018, they registered as a business and started trading in June this year.

For each product, Marilyn explains: “It was about understanding some of the problems we were facing.” In her case, eczema. They might have only started in June but they’ve already got repeat customers.

They also want to educate the public more widely, especially young people, about the impact chemicals used in the beauty industry, such as hair relaxants, can have on your skin. Marilyn says: “A lot of people don’t even realize about the health conditions that these chemicals can cause.”

Both Susanne and Marilyn live in Bow and have lived in East London all their lives. They do sometimes venture to “stressfield” but their favourite haunt is Roman Road Market where they now trade on a Saturday.

It might be where they pop for a bargain outfit or two but they were surprised by how much they sold on the market. Marilyn says: “Now, that’s like our little baby. No matter what, we will always be going back to Roman Road.”

They both start laughing when talking about being women in the predominantly male world of street markets. Marilyn says: “I think we use them to our advantage, to be honest.” Susanne then explains how they enlist the male traders to help set up their stalls.

That’s not to say they aren’t excited about the prospect of a market run by women. For Marilyn: “It’s about us women sticking together, networking, building us to get stronger.”

They both agree that they feel more comfortable and motivated at the thought of working with other women, with a shared understanding of the extra work it takes for women in business.

Susanne left her job in the construction team at the NHS to focus on Mazsu Naturals while Marilyn still works full time as a monitoring officer. Susanne describes being much happier now: “I miss the social part of being with people, but I don’t miss the job.”

For Marilyn it can be a challenge finding time to devote to the business: “It’s so busy, you’re doing a nine to five and then you have to come home, do your cooking and it’s probably about eight or nine o’clock by the time you can try to do something.”

They don’t have a lot of free time, but what little they do have is devoted to their families. Marilyn says: “You just have to find the time.”

Their families support their venture, not only do they test the products, they buy them and recommend them to friends and family. Their nephews are currently big advocates for the beard oil.

The two women are an inspiration to their families – Susanne recounts how her two sons, aged 19 and 26, want to get into business themselves and Marilyn’s ten-year-old niece is the same. She already wants to help her aunt out.

When they started Mazsu Naturals, the pair envisioned that their products would be for black skin. Since they’ve started selling at markets, they’ve discovered that their products are popular with everyone. Now, Susanne explains: “We’re trying to cover everybody, to bring natural organic skincare to everyone.”

That said, they have been inspired by other UK-based black female businesses like Sheabutter Cottage and Big Hair + Beauty. Their main inspiration though? Michelle Obama. Marilyn says: “I love that lady!”

Their relationship has come a long way from the days where they worked in separate departments, rarely crossing paths unless Marilyn went to Susanne needing help with something.

Susanne jokes that it’s just “okay” working together before clarifying: “It’s really good!” In fact, it’s something they both wish they had started “twenty years earlier”.

Long term they say it’s possible Susanne will return to part-time work but this isn’t dampening their ambitions. They hope to run workshops, educating about the importance of natural skincare, as well as developing more products.

For Marilyn and Susanne, what’s important is using their skincare to bring good to their community and creating solutions for those who need them most. They’ve taken their own challenges to create a business with purpose. In a sector that often only sells a lifestyle, it’s refreshing to see a range of skincare products designed to solve a need. It’s no wonder customers keep coming back.