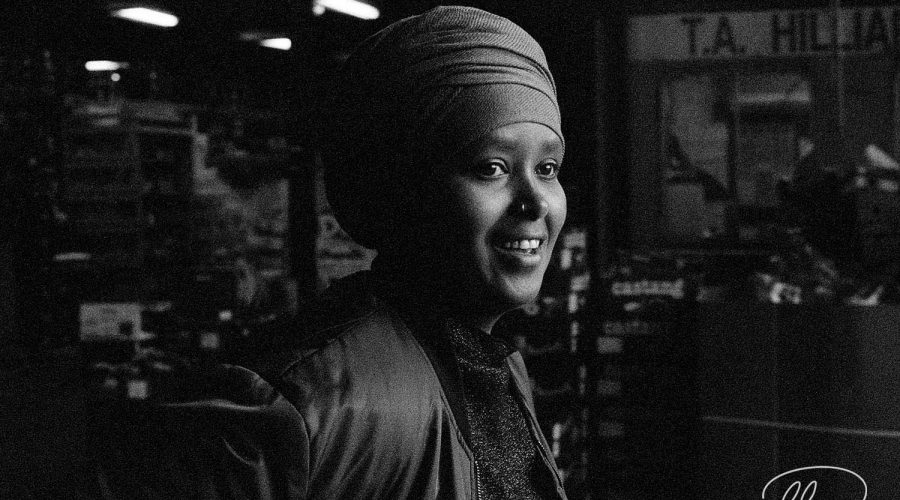 Amiira Ismail, 30, doesn’t like cooking, but when it comes to her hot sauce, it’s a completely different story, so much so that she spends all her time making, packaging and selling it.

“Normally I don’t like cooking but my sauce yes. I don’t even know where this came from but I love it, I love doing it.”

Taken from a family recipe based on popular Somali sauce Basbaas which means chilli, Amiira spent nine months developing her own secret recipe, testing it on friends and family, before she started selling it. Now she makes batches from her kitchen at home and sells them. It’s been two years since she started.

Amiira is softly spoken and lives with her mum in a new-build flat in Poplar. They’ve just moved in, but apart from a few pictures including a large map of London waiting to be hung on the walls, there are no boxes to suggest a recent move. This will be the place Amiira makes her sauces from now on.

Amiira moved to East London in 2004 aged 15 after her family left Somalia because of the Somali Civil War, moving first to Kenya before the family reunited with one of her sisters in the UK. She says she found it okay moving: “It was good because we came here during summertime coming from a hot country to summer.”

Amiira already spoke English from her time in Kenya, so says she didn’t find it complicated settling in at Poplar’s Langdon Park School. She likes living over here but says the only thing she doesn’t like as much is that no one knows their neighbours in the same way – you can’t just pop round if you’re running out of sugar like she would have in Somalia.

Amiira’s business – Amira’s Foods – all came about after Amiira lost her job as a clothing distributor. For five years she had worked night shifts, working from eight pm until eight am. She recalls: “It was hard. Since I’ve not been doing night shifts I feel like an alive normal person, I used to be a zombie.” That said, Amiira says she didn’t mind her job and in particular she liked training new employees.

When she lost her job Amiira decided to launch her own business. “I said okay, let me do this because I had these ideas and then I saw a market outside and thought if they can be up doing it, let me do this hot sauce and here I am.”

Amiira remembers thinking: “I’m here in a country where anything is possible.”

Starting out was difficult, especially as she has no background in business. From printing stickers to sourcing packaging Amiira says: “It makes me proud achieving these small things.” Now she loves everything about her job, and she’s changed from not being a morning person to being able to get up “no matter what”.

Amiira sells her Basbaas sauce at multiple markets and she does everything herself from the cooking to the packaging to the selling. She seems unphased by being a woman in the largely male domain of street markets. In fact, Amiira explains it is not something that occurred to until she met people who were surprised to see her at the market. She is defiant: “I don’t see myself as a victim because I’m female. I’m there, just doing my work.”

One thing that surprised Amiira about selling at markets was how closed many of the traders can be, unwilling to share information on the products they sell. In contrast, if someone asks Amiira a question she is happy to share: “I’ll give them everything they want – apart from how I make my sauce!”

What Amiira loves most is hearing what people think of her sauce, especially if they taste it, walk away and then come back later to buy it. She says: “I knew I had a good flavour but I didn’t know how people were going to react to it.” Customers say to her: “It’s better than Nando’s!”

Ultimately Amiira would like to sell her Basbaas sauce in supermarkets. She says: “I want it to be as known as hummus.” ‘She would also like to expand her range as she has an even tastier sauce up her sleeve. We might have to wait a little for that, however, as apparently it’s also more difficult to make.

When it comes to Somali cuisine Amiira calls it a “hidden gem”. “For me, it’s the best cuisine around but people don’t know yet about it.” Amiira describes Somali food as spicy but not overwhelming.

“Many of their dishes centre around rice and fried meat and Amiira’s favourite is Suqaar which is marinated lamb and rice.

Amiira’s favourite Somali restaurant in East London is called Nasiye Café in Stepney Green, where her family often order takeaway from. She says: “I would like more Somali restaurants because most of the people who taste it like it. Hopefully down the road, I might end up opening my own restaurant.”

Amiira tests all her food on her family and says her nieces, in particular, are big fans of her hot sauce. She says: “My family, they’re really proud of me. My sisters didn’t think I’d put myself out there. They were surprised but they’re really behind me and they’re helping me as well.” One Amiira’s sisters enlisted the help of a graphic designer friend to design the Basbaas Sauce packaging.

With all the work that goes into setting up her own business, how does she switch off? Sundays are Amiira’s days off: “I let me just be by myself. I don’t want to think about anything.” She likes watching things on YouTube and will watch anything from Dragons Den to viral videos.

She’s also currently reading a book called Manifest Now for motivation, encouraging herself to “just keep on pushing.” Amiira is her own role model – working for Lady Lane Market is the first time she’s met other women in business.

As she explains all she’s learnt in the past two years and how fearless she is now, it’s clear she has grown in confidence through branching out on her own. She reflects:  “I’ve reached a point now where my mind is settled and nothing can stress me because I’ve been through it all. With anything, I say ‘Okay I’ll do it’ or ‘I’ll figure it out now’.”